Abstract
As issues on sustainable construction gains more eminence, research on utilization of natural fibres in concrete is actively executed. Current progressions in the development of construction materials have involved the utilization of plant-based natural fibres such as coir, kenaf, sisal and banana to substitute conventional fibres such as steel and polypropylene to improve the mechanical properties of lightweight foamed concrete (LFC). LFC is a cementitious material containing evenly distributed air bubbles in the matrix, formed by mixing water with cement, fine sand and at least 20% air bubbles from a foaming agent. The air bubbles produced in LFC typically serve as the coarse aggregate in the matrix since there is no coarse aggregate in LFC. However, the major challenge in the use of these fibres is the durability performance of the alkaline cement matrix and its compatibility due to high water absorption. Hence this research focuses on the use of alkali treatment of banana fibres to boost the mechanical properties of LFC. Banana fibres were subjected to sodium hydroxide treatment of 2%, 4%, 6%, 8%, and 10% before being included in 1200 kg/m3 density LFC. Plain LFC and untreated fibre were used as the control specimen. Results from the study indicate that the compressive, flexural and splitting tensile strengths at 28 days increased simultaneously with 6% treatment to peaks of 41% and 60%, 64% and 117%, and 77% and 158% respectively compared to the untreated fibre and plain control LFC. It is therefore concluded that 6% treatment of banana fibre was the optimum percentage treatment for use in LFC.

1.    Introduction
Lightweight foamed concrete (LFC) is defined as a mixture of mortar or cement paste (base mix) and stable and homogeneous foam introduced using a suitable foaming agent, which can be regarded as self-compacting materials. LFC has an air content of more than 25% by volume, thus, distinguishing itself from air highly air entrained materials. Other academic terms describing this material are lightweight cellular concrete, low-density foam concrete, or cellular lightweight concrete. In practice, it provides satisfactory solutions to address various challenges and problems faced in construction activities. It is known to be highly flow-able, possesses low self-weight, has a minimal aggregate consumption, controlled low strength and superior thermal insulation properties. Fewer chemicals containing in this material well meets the sustainable and environmental demands, and sometimes, it can be partially or even entirely substituted for normal concrete [1]. Once controlling the foam dosage, foamed concrete can be produced having a wide range of densities such as 600-1600kg/m3. The textural surface and microstructural cells make it widely used in the fields  of the thermal insulation, sound absorbance, and fire resistance. Nowadays, LFC has been quickly promoted as construction materials for tunnels and underground works. Its excellent self-flowing capacity can be used to fill voids, sink holes, disused sewage pipes, abandoned subways, and so on. The low and controlled self-weight makes it capable for load reduction or liner elements in tunnel and metro systems. Although increasing attention has been given to LFC worldwide, its implementation in Malaysia is still in its infancy. However, it has been utilized in a number of applications such as in the smart tunnel project Kuala Lumpur, Malaysia. The cost of LFC is majorly dependent on the cement content and the foam dose used in the mixture. Despite all the benefits associated with LFC, its greatest limitation is its weakness in tension. Because of the airspace found in its matrix, it has low strength compared to normal concrete. Latest research exertions have demonstrated substantial enhancements in the mechanical and durability properties of LFC strengthened with alkali-treated plant-based natural fibres. Raj et. al [2] conducted a study using synthetic and natural fibres consisting of AR glass, polypropylene, steel, kenaf and oil palm fibre in a LFC matrix. Kenaf and oil palm fibres were treated with a 0.1 mole NaOH solution before being added to LFC. Results indicated that despite the treatment, Kenaf and oil palm fibre absorb more water than synthetic fibres. As a whole, the addition of fibre expands the drying property of the composites. Hence, this research aimed to explore the mechanical properties of alkali-treated and untreated banana fibre reinforced LFC.

2.    Materials
River sand was prepared in accordance with BS EN 12620 [3]. The cement used was Ordinary Portland Cement (OPC). The cement conforms to BS EN 197 [4] specifications for Portland cement. Clean tap water was used for the mix. A protein-based foaming agent was used as a surfactant. The banana trunk fibre used for this study as shown in Fig. 1. The raw banana fibre was then measured and prepared for the treatment. The percentage of fibre addition used in this study was 0.4% of the total volume fraction. Sodium Hydroxide was used in the form of white amorphous tablets. Tap water was used to prepare the solution of NaOH with different percentage concentrations. The percentage concentrations were 2%, 4%, 6%, 8%, and 10%. The banana fibre was fully immersed in the solution for proper treatment. Similarly, for 4%, 6%, 8%, and 10% NaOH concentrations, 200g, 300g, 400g, 500g respectively of the pellet’s tablets were dissolved in 5 litres (5000ml) of water to obtain the various percentage concentrations of the mix. 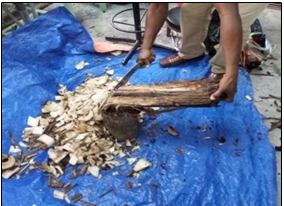 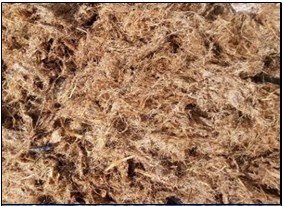 3.    Mix Design of LFC
LFC mix ratio was 1:1.5:0.45 (cement: sand: water) adding fibre at 0.4% of the total volume fraction of the mix. LFC with a dry density of 1200 kg/m3 was targeted. Two control mix batches were prepared. The first control mix was of plain LFC coded as P-Control, with no fibre addition, while the second control mix was with untreated fibre addition coded as BFU- Control. The other five batches for alkali-treated banana fibres at 2%, 4%, 6%,8% and 10% were coded as BF2% NaOH, BF4% NaOH, BF6% NaOH, BF8% NaOH and BF10% NaOH in that order. 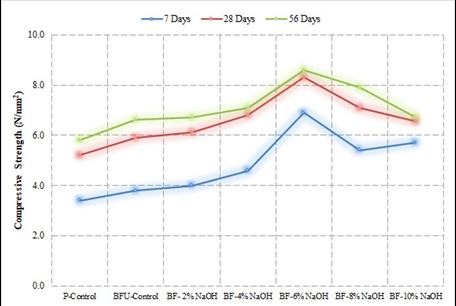 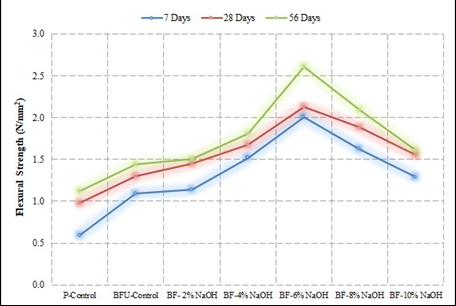 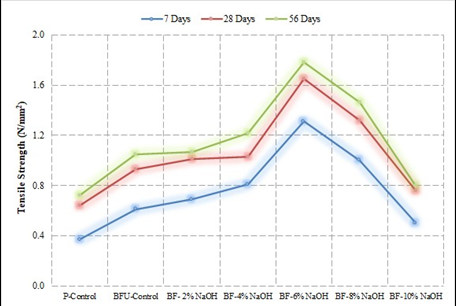 Sr Ts Dr. Md Azree Othuman Mydin obtained his PhD in Civil Engineering from the University of Manchester, United Kingdom in the year 2010. This followed both a Bachelor of Science (Building Technology) and a Master of Science (Building Technology) that were earned in 2004 and 2005 respectively from Universiti Sains Malaysia, Penang, Malaysia. Before joining Universiti Sains Malaysia as a lecturer, he has worked with Penang Development Corporation Consultancy (PDCC) as a civil and structural engineer. His specialization lies in the area of lightweight concrete technology, building construction and Industrialized Building System.

Assoc. Prof. Dr Hanizam joins USM's School of Housing, Building and Planning on 16 April 2001 as a lecturer in Building Technology programme. She obtained her first degree from Universiti Teknologi Malaysia in Civil Engineering, Master’s Degree from Newcastle University and PhD (Civil and Structural Engineering) from Universiti Kebangsaan Malaysia. She has some years of working experience with several civil & structural consultant, and contractor firms before joining Universiti Sains Malaysia. Her
main areas of interest are building construction/material and composite structure.

Salus Approved Inspectors
Nationwide
Are you an experienced Fire Safety Consultant or Building Control Surveyor looking for a new challen...