When working on a project, it is all too easy to assume that someone else is responsible for ensuring that the right product is specified, has the right evidence of compliance and is correctly installed. Yet, as we have seen in the inquiry into the Grenfell Tower fire, each individual’s responsibilities and actions are being questioned in depth.

We all carry a degree of responsibility, but sometimes it would help if it was a bit clearer. That’s why the responsible, accountable, consulted, informed (RACI) model was developed and included in the first pages of a new guide, Firestopping of Service Penetrations – Best Practice in Design and Installation. It has been published by five non-profit organisations: the Association for Specialist Fire Protection (ASFP), the Building Engineering Services Association (BESA), the Building Services Research and Information Association (BSRIA), FIS, representing the finishes and interior sector, and the Gypsum Products Development Association (GPDA).

The RACI model lists the people who are responsible, accountable and should be consulted and informed in any project. Responsibility is defined as lying with the person who will do the task, and this is closely linked with the accountable person, who has the authority to make decisions and whose head will roll if something goes wrong. Responsible people crop up wherever process has been developed around risk, such as the Construction (Design and Management) Regulations 2015, The Regulatory Reform (Fire Safety) Order 2005, and BSRIA’s Design Framework for Building Services, 5th Edition (BG 6/2018). It is also a key start to the guidance when specifying and installing firestopping of service penetrations.

The Firestopping of Service Penetrations guide was produced because of mounting evidence of a lack of compliant firestopping around services in openings. This was because either: there was insufficient investigation into the evidence that the firestopping would comply; the services had been mixed or installed too close; or the firestopping or opening was incorrectly installed or not compatible.

Often, firestopping elements are left as a contractor’s design portion, passing down responsibility to either the drylining installers or the mechanical and electrical (M&E) contractors – neither of which may have the necessary skills, knowledge or experience to carry out the work.

The aim of the guide is to encourage all stakeholders in construction to consider firestopping design earlier in the process to avoid problems at a later stage in the construction. It is not an installation manual but guidance to good practice.

To help everyone involved in the process and ensure that using a co-ordinated and collaborative approach will lead to compliant installation, the guide sets nine golden rules, aligned to the RIBA Plan of Work framework. It does this by setting out the process from early engagement with manufacturers at the initial design stages, through to installation and inspection of penetration seals.

The first golden rule is about early engagement and considers:

This is the stage at which to apportion responsibility and set some rules, such as using one system owner’s products, spacing of services and tolerances for their installation and producing service openings.

The fire strategy document is key, as it provides a clear set of measures, encompassing fire precautions, management of fire safety and fire protection. It should only be produced by someone who is competent, but it should be shared, because it will contain information on compartmentation and the requirements for any passive fire protection. M&E services can then be designed with due consideration to the firestopping penetration seals, which will dictate what services can be compliantly installed in a single opening. The size of the opening may also be restricted, according to the test evidence for the supporting wall or floor.

Penetration seals should be designed to ensure they can adequately accommodate the required number and type of services, by using a series of questions in a structured approach. The guide has a list of 34 questions, including seven about the supporting construction, three about the opening and 24 about the penetrating service.

The design should be carried out in tandem with integrating the full test report, which will show key parameters such as size, mixture and type of services and limitations.

The selection and specification process will be the most critical stage and should not be underestimated – especially if alternatives are presented at tender that break any of the rules and guidance based on cost savings. Sometimes this is inadvertently done by a helpful contractor on-site, without realising that they, in essence, become the designer, with all the responsibility added.

A good specification should follow the NBS process, where separate guidance is available for specifiers on what should be included, such as workmanship.

Specifiers may consider third-party certification in addition to test evidence when selecting products, but there may be instances where no test evidence exists and a technical evaluation may be required in lieu. These should only be carried out by competent individuals, using recognised rules contained within published test standards, such as BS EN 1366-3 12 or Extended Application standards (EXAPs), or a less formal technical evaluation as described in the Association for Specialist Fire Protection (ASFP) Advisory Note 17.

GOLDEN RULE 3: Identify all of the service types passing through the compartment floor or wall, including any insulation products. Establish the space required to install and firestop the services.

GOLDEN RULE 6: Ideally select one firestopping manufacturer throughout the project. Products from different manufacturers should not be mixed in the same opening, unless there is clear test evidence to substantiate their use.

GOLDEN RULE 7: Request copies of the third-party certification from the manufacturers. These should be reviewed by a suitably qualified person to ensure the certification and field of application is relevant for the situation.

GOLDEN RULE 8: Ensure the installers of ALL service penetration seals are third-party certified by an organisation such as FIRAS, LPCB, IFC, BM TRADA, etc.

GOLDEN RULE 9: Implement a structured inspection plan to include photographic evidence as the work proceeds.

Planning and communication is key in the success of any plan to reduce the risk of injury. To assist this, a project planning tool known as the RACI model is recommended: 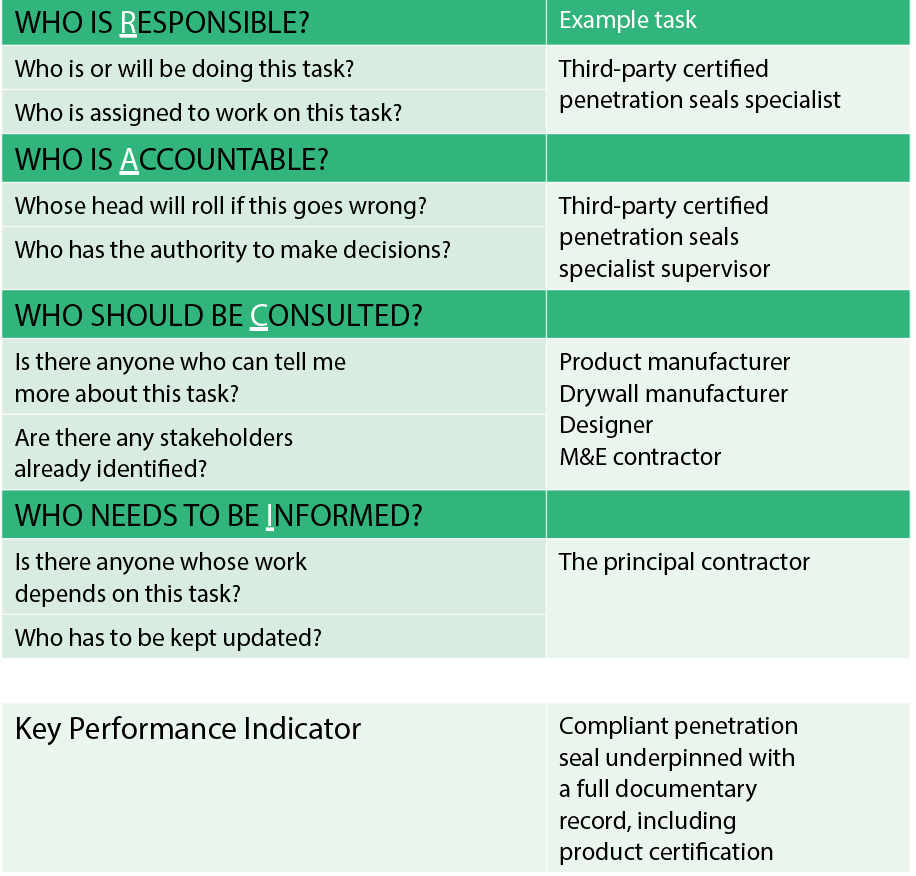 The installation of the firestopping is a crucial stage in ensuring that a compliant installation is achieved. Setting the correct inspection rules at the beginning of the process provides a series of quality checks at each stage, which, when recorded in a structured way, provides clear evidence, especially as the penetration seal could be in a ceiling void and hidden from view.

Benchmark samples – used for toolbox talks and to measure finished work – provide clear details for a range of applications. If transportable, they work well on projects covering a large area and multiple levels.

Third-party installer schemes, where the contracting company is seen to employ appropriately trained and competent staff to install the required passive fire protection system, provide a final level of quality assurance and evidence of compliancy. Approved Document B notes: “The use of certified installers will reduce the incidence of firestopping materials being installed by unskilled contractors and the use of unsuitable materials and reduce essential work and rework considerably.”

In addition to the golden rules, the guide goes on to address stages 6 and 7 of the RIBA stages of work – handover and use. At handover, all the information gathered during the design, specification and installation stages should be provided to the client. This is to meet the requirements of Regulation 38 of the building regulations.

The following information should be provided as a minimum in relation to the penetration seals:

The penetration seals should be regularly inspected – ideally, using the ASFP document TGD 17 and the Building Engineering Services Association (BESA) online service SFG20. Any new services through the installed penetration seal should be designed and installed using the guidance and processes described in the guide.

The guide includes a directory of terms to ensure that the language used in the specialist sector is understood by all, while a detailed appendix explains the regulations and signposts additional guidance and industry documents critical to the process. Furthermore, the guide includes a case study with practical examples of the recommendations in action.

Produced by the leading industry bodies that cover fit-out, building engineering, fire protection and gypsum products, the guide demonstrates the importance of addressing the design, specification and installation of building services penetrations to ensure fire compartmentation is maintained.

It is fitting, then, that Dame Judith Hackitt, Chair of the Independent Review of Building Regulations and Fire Safety and author of two reports following the tragic fire at Grenfell Tower, is quoted in its foreword: “Knowledge that is produced through collaboration and shared freely throughout the entire supply chain is key to the improvements required in building safety and quality.”

Firestopping of Service Penetrations – Best Practice in Design and Installation is free and available to download from the websites of the five non-profit associations that produced the guide:

Joe Cilia is the Technical Director at FIS, which represents the finishes and interior sector. He is responsible for standards guides and legislation, environmental and sustainability issues. He works with the British Standards Institution (BSI), where he chairs a mirror group and a major review of the drylining standard. He co-chaired the production of Firestopping of Service Penetrations – Best Practice in Design and Installation, and has been pivotal in developing the FIS Product, Process, People (PPP) quality management framework.

Cilia is the immediate past chair of the Construction Products Association (CPA) technical committee, and represents the finishes and interior sector on the CPA technical panel as part of the Ministry of Housing, Communities & Local Government’s Industry Response Group to the Grenfell Inquiry, alongside Build UK and the Construction Industry Council.

Salus Approved Inspectors
Nationwide
Are you an experienced Fire Safety Consultant or Building Control Surveyor looking for a new challen...